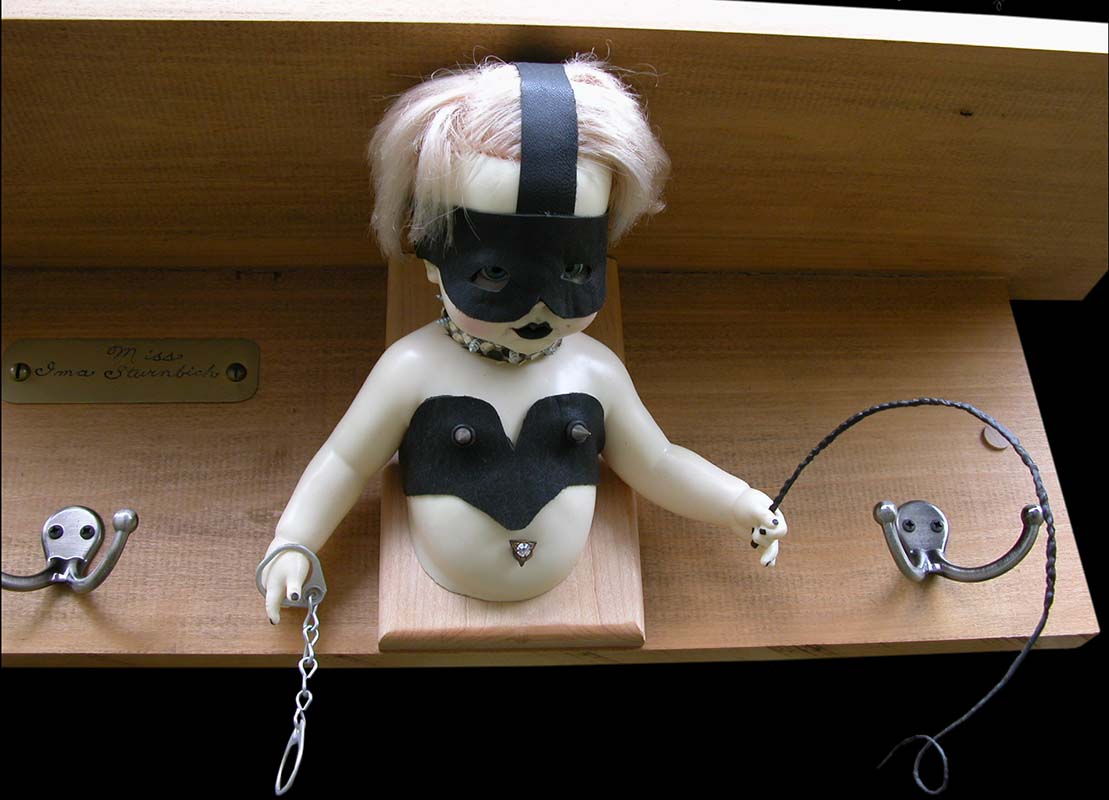 Dolls are easy targets. They are necessarily cute and innocent looking. Juxtapose that with something scary or gruesome or funny and you create a little cognitive dissonance that the brain finds engaging. But you haven't created anything. You've only modified someone else's creation (the designer of the original doll). So tricking up a doll shows some creative laziness, especially if you make a career out of it (popular as it may be).

That said, I'm not afraid to do some dollywhacking from time to time, and it's always a bonus if the piece has some functionality (hangers, shelf).

As soon as I got the design for Ima Sturnbich I knew I would have to ditch it if I couldn't make a credible miniature whip. I found out pretty quickly that the only way to make a decent looking whip is to braid lengths of material into a long tapering form. I could slice leather into thin little strips and braid it but it would not show any active whipping - it would just hang there.

So here we go. This is how you make a miniature display whip: Get three equal lengths of smallish multi-strand wire (about 18 gage). I used lamp cord and had to weasel all the insulation off, which is fun only if you're in the mood for it. Twist the whole length (the way you normally twist the end when you're making a loop to attach to a terminal). Now it won't splay all over the place when you're working with it. Clamp the three ends together in a Vise Grip and start braiding. There really isn't much to go wrong with the braiding; it either works or turns into an idiot jumble. If a couple false starts won't give it to you, just stop and go get a job with the government.

The proto-whip will have considerable body but not enough to hold its final form (and people are driven to diddle around with the whip when the piece is on display - watch out for them). A little solder will firm things up nicely. Lay out the whip on a piece of asbestos (or some other fireproof stuff if you're CHICKEN) and heat it up a little with a propane torch so you can brush on some flux and the flux will melt. Then get some small diameter electrical-type or silver solder ("Hobby Solder") and bring the whip up to heat (won't take much). The braiding will tend to suck solder but not as eagerly as sweating a copper plumbing joint so move the flame and solder along the length of the whip fairly smartly. You want the solder to only fill the braid, not puddle underneath it. The braid must show. Leave a quarter-inch at the small end of the whip with no solder.

When things have cooled down wash off the flux with lacquer thinner and use a small file to finesse the two places where you snipped off the extra wire strands and finish off the butt (it's okay if it has a homemade look about it; it is homemade).