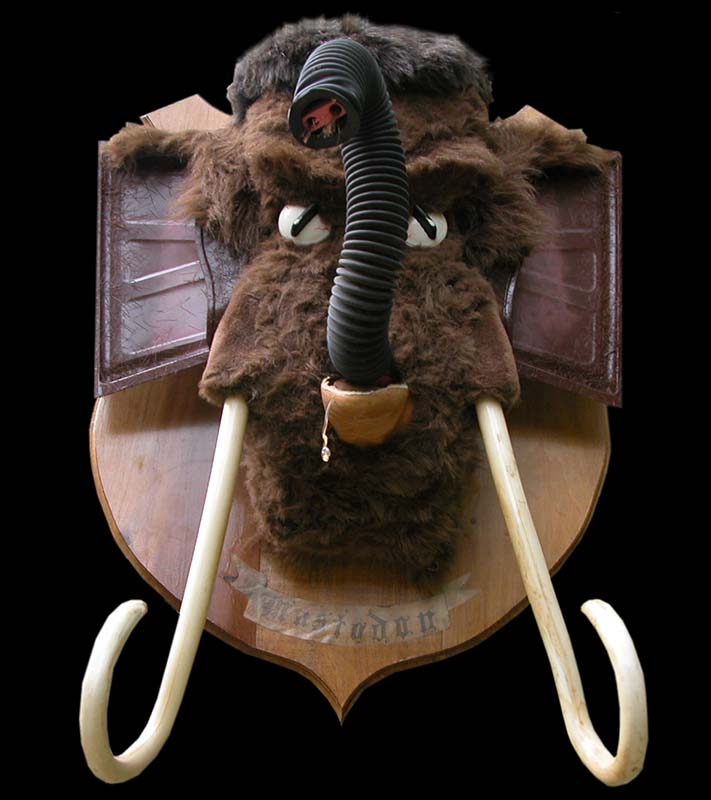 Storied creature of the distant past becomes a trophy mount.

This would be a fine addition (in more than one way) to a collection of stuffed animal heads. It got started when I noticed the plastic "harps" on a kitchen chair back. Looked like a pair of tusks if the connection at the curl was sawed through. Of course I was thinking elephant but nothing was coming to me about the eyes (very important feature). Then I thought of mammoths and mastodons. One of those varmints had a big furry kind of a topknot instead of a smoother, more sloping forehead. That's what I needed to build up an angry browridge over the eyes, which were to be old-fashion stove knobs. A couple of (toy) stuffed animals gave up their fur and it was fun to use electric clippers (the same clippers with which I cut my own hair and that of the cat) to sculpt the eyebrows.

The hardest part technically was fixing a strut to hold the trunk in place. The average citizen wouldn't be able to follow the procedure so I'll just say that there is a lot of hardware under that fur.

The ears had me stumped for quite a while. One of the principles (the main principle, I guess) of found-object art is that the object should successfully represent an element of the design while still being recognizable as its original self. For example, if you build a squirrel's head out of a trailer hitch ball (see BABIES IN PERIL), people should look at it and think or say, "Hey, that squirrel is a trailer hitch ball." Otherwise you may as well be building or sculpting from scratch (and there's nothing wrong with that but it isn't found-object art). One of the most amazing pieces of work I've ever seen took this idea one step further. I was wandering around the grounds of the Walker Art Center in Minneapolis and from a distance I spied a group of life-sized elk or caribou sculptures. They were very good - looked like real animals. Then I got closer and saw they were all made completely out of driftwood! They didn't look so much like real animals but they sure looked like real driftwood. I got closer yet and saw that the driftwood was actually investment cast bronze. Then I got closer yet and ... no (ha-ha) that's the end. It really knocked me out.

Anyway, where was I? The ears. Yes, yes, the ears. I couldn't come up with mastodon ears. I explained the requirements to my wife and she said dustpans. Dustpans were just what the paleobiologist ordered but they needed to be hairy. So I cut up a paintbrush, shot the dustpans with clear enamel and sprinkled the bristles while the enamel was still wet. When it got tacky I sprayed another coat or two to get good adhesion. Then later (with the same brand of paint and within 24 hours) I painted the ears the proper color and ended up with dustpans that look like hairy ears. Context is everything.